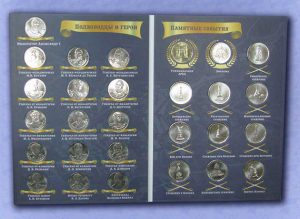 Nothing can so please the present coin collector, as a new coin in its collection, and even better, if it will be a whole album of commemorative coins. However, if some large anniversaries are still far away, and some have already passed a long time ago, then it is probably worth remembering that this, 2012, is the two hundred year anniversary of such a great event as the Patriotic War of 1812.

Most firms and companies are constantly competing with each other, trying to sell coins. Which do not have any relation to the coins dedicated to this anniversary, and are what are called self-bred, which will be ashamed to even show to other collectors of coin collectors. The only thing left from such a seemingly pleasant gift is sadness and annoyance, that you have been deceived wildly, slipping it and giving what you wish for. With all this. You will not be able to show your rights to anyone, since the manufacturer is not responsible for what you bought, she is responsible only for the quality of the coins made, and what you think is your so-called personal problems.

In order not to be mistaken with the choice of a suitable gift, it is worth knowing that a real set of commemorative coins dedicated to the Patriotic War of 1812 consists of twenty-eight coins placed on a neat album, picking up which, the numismatist will immediately realize that the set he purchased is real and quality. On the face of the album there is an image of a topographic map, a sword and a Russian headdress of the times of the Patriotic War against Napoleon of 1812.

As for the coins themselves, then, as has already been said in principle, there are twenty-eight of them, and in order to avoid an error and not be thrown, we decided to describe in detail which coins are included in the commemorative set of coins:

Sixteen coins are great generals and people who somehow took part in the war of 1812, and these coins have a nominal value of two rubles:Emperor Alexander I;
N. Raevsky;
M. Miloradovich;
M. Platov;
A. Osterman-Tolstoy;
B. Kozhin;
A. Kutaisov;
N. Durova;
A. Ermolov;
D. Davydov;
D. Dokhturov;
P. Wittgenstein;
P. Bagration;
L. Benningsen;
M. Kutuzov;
M. Barclay de Tolly.
Ten coins represent the most important battles and battles of this World War II, and have a nominal value of five rubles:Fight at Vyazma;
The capture of Paris;
Smolensk battle;
Tarutino battle;
Battle of Borodino;
Battle of the Red;
Maloyaroslavets battle;
Battle of Berezina;
Battle at Kulm;
Leipzig battle.
In addition, the set included such two rather unique coins as a coin with the emblem of the Napoleonic War of 1812, with a face value of two rubles and a coin with the image of the Triumphal Arch, with a face value of ten rubles.

This set will be a wonderful gift for any person, including a child, because, who knows, perhaps starting from this, a real collector-numismatist will grow out of it.