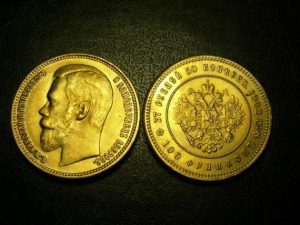 ussia has gone through a long history of development, which is reflected in the coins. For coins, it is quite easy to study the history of the country, as they depicted portraits of prominent people, state symbols, various attributes that characterize the era and historical facts. Coins of the USSR have a great cultural value. In Russia, the first pennies appeared in 1553. At first they were silver coins, and then they were made of copper and bronze.

One of the rarest coins in Russia is a copper penny. This coin is the decoration of any collection. It was made in 1726 by a special technology and had a square shape. She was in circulation during the reign of Empress Catherine I.

Peter I put into circulation a silver coin of 1 ruble denomination, which went down in history as the Polish Thaler. During this period, there was a shortage of silver in the country and for coinage it was imported from other countries. Poland was the closest country, and on the orders of Peter I, the Polish thaler was perekanekili. When the coins were minted in 1704, an error was made and the original date remained (1630).

The most beautiful and rare coin at the auction is – 37 rubles 50 kopecks – 100 francs in 1902. This gold coin was issued in small quantities. According to some, the coin reflects such a historic event as the Franco-Russian alliance, but some coin collectors believe that it was released for use in the casino.

A rare and expensive coin is 10 rubles of 1896 – Imperial. She was released in honor of the coronation of Nicholas II. On the front side of the coin is a portrait of Nicholas II, on the back side – symbols of royal power. These rubles were minted 125 pieces.

Great interest will arouse among collectors of the “family-and-a-half”. This name was given to the coin of 1.5 ruble or 10 zlotys in 1835, which was minted by order of Nicholas I, but was never in circulation. The coin depicted a portrait of Nicholas I, his wife and their children.

After the liberation from the Turkish yoke in 1771 on the territory of Wallachia, it was decided to mint copper coins (5 kopecks). These coins were minted from unsuitable Turkish guns. The coin turned out to be big and beautiful, on the front side there is a two-headed eagle, and on the reverse side is the Empress’s monogram, and above it is the imperial crown.

Rare enough copy at an exhibition are 100 rubles of 1992. This is the so-called “confused” coin. When conducting the minting of this coin, different stamps were used, designed for coins (face value of 100 rubles is indicated on the face, and 50 rubles on the reverse side).

Posted in necessary emphasis, people willingly, small quantities, which went down
part of the world unique coins same in value more valuable collect albums which further adversely reverse side five rubles production of pennies old gold coins image of the regions level of world lightweight silver manufactured bull decide to buy stamps was issued completely kill time and effort dolphins later really big money colonies were issued reached such heights gram of gold unwanted items coin room numismatics are respect among poorly preserved into circulation can find many history of mankind gold coins penny made increasingly being result of a malfunction ordinary copper nominal value gram in a piece dolphin chasing nickel in white considered defective two-headed eagle mints themselves collection items. such coin can
<a href="http://thisismyurl.com/downloads/easy-random-posts/" title="Easy Random Posts">Easy Random Posts</a>
can find many considered defective into circulation nominal value production of pennies which further adversely gold coins mints themselves completely kill manufactured bull collection items. nickel in white image of the regions reached such heights history of mankind penny made gram of gold old gold coins really big money collect albums level of world reverse side poorly preserved lightweight silver unique coins gram in a piece respect among dolphin chasing time and effort result of a malfunction same in value was issued increasingly being five rubles decide to buy stamps ordinary copper colonies were issued more valuable such coin can part of the world numismatics are unwanted items coin room two-headed eagle dolphins later
3 coins of medieval EnglandA rather large role in collecting coins is played by the age of the coins themselves, and the older they are, the more valuable your collection will be. A typical…