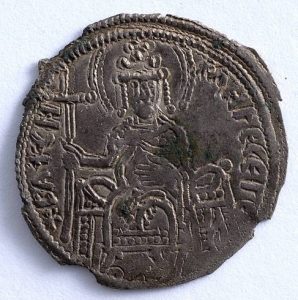 Not so long ago, about 50 years ago, that for a numismatic business is essentially a short period of time, coins of Russian princes made of silver and gold began to be discovered. They were not of the best quality, so they were taken for very similar Byzantine coins. But since the 19th century, coins began to evoke serious interest, and as a consequence, the emergence of various disputes. Some called these coins Serbian, others said that they were of Bulgarian origin, and others indicated several more possible regions. But after the treasure was found on the territory of Ukraine in 1852, with more than two hundred coins of the same kind, the disputes immediately settled, since the origin of such coins was a generally recognized fact.

There are few such precious monuments of the coinage, despite the large and rich history of Russia. Scientists today know only about 20 gold and 400 silver coins of this period. This suggests the conclusion that such coins did not play a significant role in monetary circulation, and were merely a proclamation of the sovereignty of Russia. The image of the prince, his ancestral sign, and the divine patron, for example, Christ the Almighty, were minted on the coins.

A century later, the image of the supreme patron begins to disappear, and at the same time, the prince himself takes his place, with a halo on his head, he shows that he is the main one, and is elected by the god himself.

All coins of Ancient Russia are considered practically priceless specimens, the most famous of which are coins depicting Prince Vladimir, Svyatopolk, Yaroslav the Wise, Boleslav the Brave, Oleg. The drawings and inscriptions on the first coins of Russia are unique, they can not be found in any of the subsequent eras. Rather, they are a means of propaganda, proclaiming princes to be rulers from God, which is characteristic and very accurately conveyed on the coins and legends themselves.

As for the chronology of the coins of ancient Russia, despite the fact that the first ones were found at the end of the eighteenth century, they were only able to bring them to a temporary order after eighty years. This made I.I. Tolstoy, one of the largest collectors and collectors of coins of ancient Russia. In 1882 he published a book in which he classified the collected and known copies. In fact, this classification is used in modern times. Of course, it has changed a little, but the essence remains the same – the assignment of coins to the rule of individual princes, such as Yaroslav the Wise, Prince Vladimir, Svyatopolk Damned, and so on.