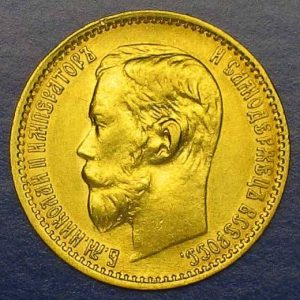 Under Nicholas II, all gold and silver coins again became portrait, in contrast to small money, which was intended for the lower strata of society. The hands of representatives of the noble class should not touch the royal profile.

During this period, the load on the St. Petersburg Mint was so great that the government was forced to enter into contacts with the mints of other countries – Paris, Brussels and even Japan, where small coins of 10, 15 and 20 kopecks were minted. To ensure that the differences in coins were minimal, the St. Petersburg Mint provided its partners with queen keys and stamps. By divergences on the edge it was possible to determine the place of coin minting: one star – the Paris Mint, two stars – the Brussels.

On some ruble papers printed in 1896 in Paris, the obverse and reverse were positioned “upside down” towards each other. This is one of the characteristic features of French coins.

As for the trial coins minted in Belgium in 1897, the two stars that determine the rubles belonging to the Belgian mint turned out to be blurred due to a technical malfunction of the equipment. This feature is interpreted by some researchers and coin collectors as the image of birds.

One of the rarest coins of that period are the Rus. These trial coins in denominations of 5, 10 and 15 Rus are of great interest to collectors and researchers, since at the moment there are only five sets. They were minted in the period between the “Alexander” and “Nikolaev” dozens, but the circulation was never released, since Nicholas II did not approve the coin.

Coins, which were made in 1911, are quite common. But among them are quite a lot of fake ten.

Besides the fact that the Nikolaev gold dozen is one of the symbols of a bygone era, many secrets are connected with its stories. It has been established that the stamps of the imperial coin of 1911 were secretly removed from the mint. According to one version, they fell into the hands of Admiral Kolchak, who later minted dozens of Nikolaev.

Many researchers – coin collectors believe that the stamps were used by the Soviet government for minting coins from 1925 to 1927. The population trusted far more familiar royal money than Soviet money.
The right to life also has an assumption about the export of stamps abroad, where coins were minted in the twenties.

At the moment, it is absolutely certain that someone still mints the royal dozens, using fake stamps.