Valuable coins of the era of Paul the First 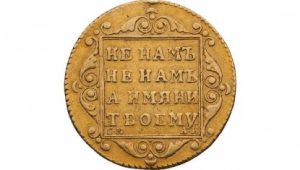 Despite the fact that there is an enormous amount of coins all over the world, it is the coins of pre-revolutionary Russia that deserve a lot of attention, differing not only in the fact that almost all of them are preserved and have reached us in perfect condition, but also in the fact that each of these coins has its own story. Nevertheless, you should certainly pay attention to the coins of the epoch of Paul the First, which are distinguished, apart from their great diversity, also by great rarity.

One of the first coins, on which I would like to draw the attention of coin collectors and collectors, is a coin worth 1 ruble of the 1796 sample. The coin is made of silver 868 and has a weight of 29 grams. Pay attention immediately to the fact that the coin is quite rare, since the circulation, according to official documents of that era, was less than 50 thousand copies. The front part of the coin has a coinage in the form of a double-headed eagle, in the lower part of which, on the left are the letters B and M, which can only be decoded as “Bank coin”. The year of issue of the coin is indicated on the upper edge – 1796. On the back side of the Bank coin, the inscription “Not for us is not your name,” placed in an open-work frame.

The silver ruble of 1797 is also one of the rarest coins of the reign of Paul the First. As well as the similar coin of 1796, this ruble is made of 868 silver, but already has a slightly smaller weight – 28.93 grams. In addition, on the face of the coin there is an image not of a double-headed eagle, as it was before, but a coinage in the form of a cross, on the tops of which are crowned with royal crowns. Even despite the fact that the circulation of the coin is about 950 thousand pieces, the coin is very much appreciated by coin collectors.

And finally, another one of the rarest coins of the period of Paul the First is a coin of the sample of 1801, worth 5 rubles and made of 986 gold, with a total weight of about 6 grams. Only about 180 thousand of such coins were issued, but the point here is not in circulation, but in the fact that this five-ruble coin is one of the few that were issued in Russia from almost pure gold. In its execution, the coin almost completely and completely resembles a single-ruble coin of 1797, followed only by a change, that its diameter is much smaller – the inscription in an openwork frame and a four-pointed cross, tops of which are crowned with state crowns. Buy coins of this sample if you succeed, then only for really big money – about 10-12 thousand dollars in equivalent.

Coins of Russia can be valued quite expensive, and therefore, if you just enjoy collecting, just study your collection, as it is likely that only one coin can bring you a fortune. Coins of the epoch of Paul the First are valued rather expensively, even if they are made of ordinary copper, and at first glance they are not particularly attractive and do not carry any special features or signs.