The first banknotes of the Northern Black Sea coast 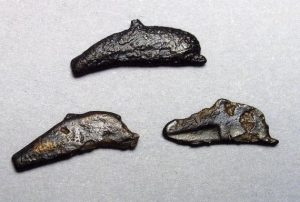 In the early stages, after the settlement of settlements by Greek colonists in the Northern Black Sea region, exchange and trade with local tribes were conducted by means of “barter” or without a monetary exchange. And with the development of commodity relations, the functions of money began to perform common, necessary – but valuable goods. For example: arrowheads, glass beads, bracelets, rings – used for small calculations. And for large transactions – products made of precious metals, cattle, horses, slaves.

The oldest, home-denomination banknotes or “pra-monetas” of the Northern Black Sea region are coins-arrows, the shape of an arrowhead, with a broken off sharp end and without an opening for an arrow tree. Namely, arrowheads were a very valuable and necessary commodity that was best suited to perform the functions of money – nomadic tribes of the steppes, and ancient colonists, who also mastered these lands. Therefore, the usual shape of the tip was given to the first money. This was the first stage in the development of monetary relations. Another issue of such coins is associated with the religious cult of Apollo, the patron saint of colonists, whose attributes were just a bow with arrows.

Scientists believe that such first coins appeared and were in circulation in Borysfen, but it was possible that they were later cast in other areas. The largest spread in Kerkinid, Olbia, Tire and Niconia.

Some arrow coins have images and symbols: circles, lines, arcs, triangles or inscriptions. This is considered to be the special marks of chasers, first for cult purposes, and then for money. And if they are on the coin, its current price may increase tens or hundreds of times. Known also imitations of coins-arrows made of bronze plates, handicraft forged – to give the desired shape. This may indicate a non-centralized production of coins, or an attempt to manufacture counterfeit money.

In a later development, at the second stage, the coins of the arrow take on other forms: fish, fish tail, eyes on one side. For such coins stuck the name – coins arrow-fish.

Closest in production technology and pattern to coins, arrow fish and arrow coins will be bronze ingots of various weight and size, the shape of a truncated segment. They are known under the name “Berezansky Assy”, some of them contain one or three coins-fish, like on dolphin coins.

Coin-arrows, arrow-fish and coin-segments are closely related in numismatics with the release of dolphin coins by Olbia. Obviously, the arrow coins and arrow-fish are small loose change, and the coin segments are the largest denominations in the monetary system, as the dolphins later became a small change coin in relation to the Assia of Olbia.

Several types of bronze dolphins (arrow-shaped dolphins) are technologically related to arrow coins and arrow fish. The casting was done in such a way that the sprue hole was like that of arrows, in the upper part from the side of the head. At the same time, subsequent dolphin chasing had it from the side of the tail. Perhaps such a release, when the dolphin has a forked tail like a arrow-fish, a transitional form from arrow-fish to dolphins, one of the first minting in Olbia. It clearly shows the shift of the colonial center from the Borisphenids (the early period of ancient Greek colonization) to Olbia – one of the largest ancient states of the Northern Black Sea region.